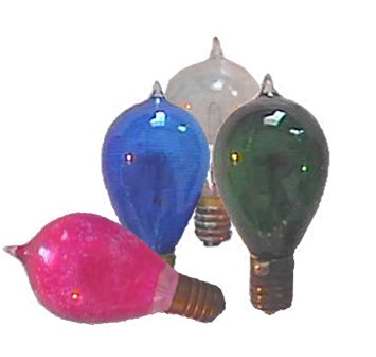 Christmas lights have come a long way since their inception in the 17th century.

Outdoor Christmas light displays on houses evolved from decorating the traditional Christmas tree and house with candles during the Christmas season. The tradition of lighting the tree with small candles dates back to the 17th century and originated in Germany before spreading to Eastern Europe. The small candles were attached to the tree branches with pins or melted wax. In addition, European Christians used to display a burning candle in the windows of their house that was visible from the outside. The candles in the window indicated to other Christians that the house was a Christian house and that other Christians were welcome to come worship with the residents.

During the 1880 Christmas season, Thomas Edison introduced the first outdoor electric Christmas light display to the world. He displayed the lights outside of his laboratory compound, which sat near a railway where many people could see it each night. This was the first official outdoor Christmas display that was separate from decorating just the Christmas tree.

Edward Johnson, who was an inventor under the supervision of Thomas Edison, created the first string of Christmas lights a couple of years later. The string of lights was made out of 80 small electric light bulbs. In 1890, the strings of lights were mass-produced and department stores began displaying them in Christmas displays in their stores. Public displays of Christmas lights in retail stores and government buildings became more popular in the U.S. at the turn of the 20th century and gave way to outdoor displays on homes a few decades later when the electric lights became more affordable.

As the trend took off, it became apparent that lighting up the Christmas tree and house definitely took effort and money. For many people, the only Christmas light display option was to light up the tree with candles, because they could not afford to buy lights. The trees would be displayed for only a couple of days before Christmas, and the candles were only lit for a few minutes at night, a far cry from the elaborate tree and home displays we are familiar with today. People were aware of the fire dangers and kept buckets of water and sand nearby in case the tree caught fire. The lit tree was often placed in front of a window for people outside the house to see.

In 1895, the first White House electrically lit Christmas tree was sponsored by President Grover Cleveland, which brought national attention to the trend. At the time, only wealthy people could afford the cost, which was upward of $300 per season (which would be more than $2,000 in 2010).

NOMA is a company started by the Sadacca brothers: Albert, Henri and Leon. It was formed in 1925 from the union of 15 companies in the Christmas light business at the time. After a devastating fire in New York City caused by candles on a Christmas tree, Albert Sadacca was inspired to create safe Christmas lights. The NOMA electric company was the largest Christmas light distributor and survived the Great Depression. In 1968 NOMA stopped producing and distributing Christmas lights and closed its doors because of increasing competition from competitors.

However, thanks to NOMA and other competitors that arose, more and more people began to purchase Christmas lights in the 1940s and 1950s as the lights became cheaper, and people started decorating their houses as well as their trees to match elaborate department store displays. As the lights became affordable to more people in the 1940s and 1950s, people decorated their houses to symbolize the Christmas star that was supposed to have the Three Wise Men to the manger where Jesus was born on Christmas Day. The outdoor displays have become a symbol of the Christmas season.

The incandescent Christmas lights that cheerfully light up the dark days of December have come a long way. Candles on trees and in windows have given way to massive outdoor displays that attract visitors from miles away. The mini light is the most popular light style, and most of these lights come with a built-in twinkle. There are different incandescent light sizes offered today, and most function in the same manner. Light-emitting diode, or LED, lights are energy-efficient and help reduce carbon emissions and your electric bill. Christmas light displays often bring out people's competitive spirit to see who can have the most elaborate display on their street.